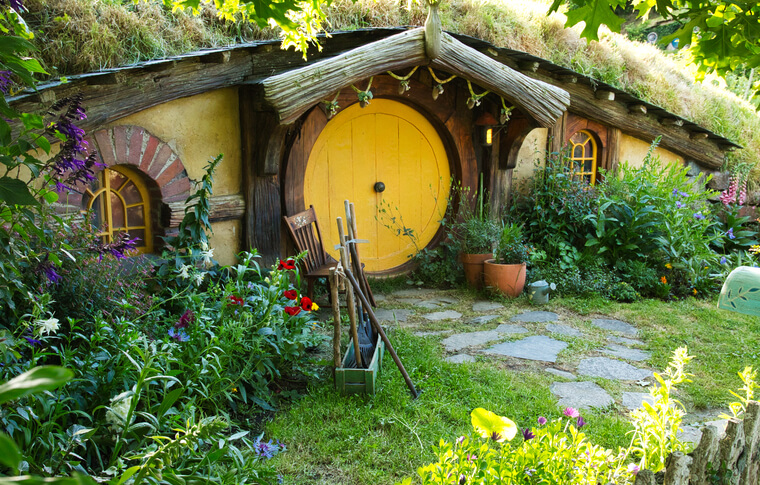 G’day, this is Dianne at Go WalkAbout Travel, your specialist on all things Australia, New Zealand, and the South Pacific. Our topic today is How to visit the film sites from the Lord of the Rings and The Hobbit we know this will get many film fans excited. As you may already know, the Lord of the Rings and Hobbit movies were filmed in New Zealand.

What you may not know is that many of the original filming locations are accessible to the public. Several newer tourist sights have also sprung up, that weren’t part of the movies, but definitely allow film fans to have fun.

Even if you’re not a huge fan of the movies, you might enjoy doing some film-related touring during your visit to New Zealand. After all, many of the sights are just spectacular New Zealand scenery, since most of the sets have been removed. (Hobbiton is the only place where you can see sets that they used in the films, still in their original filming locations.) More than once, we’ve been in New Zealand looking at a beautiful bit of scenery, and then heard that it was used in the films. So, film touring and regular touring in New Zealand overlap quite a bit!

In this blog post, I’ll name the best areas to visit in New Zealand for Lord of the Rings and Hobbit film fans, including Amazon’s new highly anticipated TV series, ‘The Lord of the Rings: The Rings of Power, and a couple of our favorite hidden gems that aren’t in all the guidebooks.

How to visit the film sites from The Lord of the Rings and The Hobbit: Locations

Hobbiton: where the cute little houses are!

Located in Matamata on the North Island, is what used to be a farmer’s private sheep farm. This all changed when Peter Jackson asked to use the farmer’s land as a film site for the fictional town of Hobbiton in Lord of the Rings. As the story goes, apparently filming ran long and the farmer needed his land back in time for lambing season. So when the film crew left, they didn’t have time to pack up everything. Instead, they just left much of the set behind.

Whether or not that’s the reason for the sets still being there, it’s a good thing they are. Because today, Hobbiton is a bustling hub of tourist activity. You can enjoy anywhere from a couple of hours to a full day here, enjoying everything Hobbit. They’ve rounded out their offerings and done a lot over the years to create a fun experience for everyone. They’ve even recreated the film’s Green Dragon Inn, a charming place to grab a pint before or after a tour.

Hobbiton is in a very rural area, as you would expect from a former sheep farm. Our favorite places to stay are farm stays, where you get to meet and stay with a real New Zealand farm family. If that’s not your preferred style of accommodations, then you can just stop for a 90-minute tour at Hobbiton while driving between Auckland and Rotorua, or Coromandel and Rotorua. Guided day tours including transportation from Rotorua and Auckland are also available.

This is an excellent, strenuous day hike on the North Island that just so happens to include the peak that was used as Mount Doom in the movies. You can do the hike on your own or with a guide, just make sure to have return transport because it’s 19.4 kms (12 miles) one way (not a loop track).

Many have called this trail the best one-day hike in the world. The Tongariro Alpine Crossing located in the Tongariro National Park is challenging, but doable within 7-8 hours for even the slowest walker. And boy oh boy, is it ever worth the effort. It travels across a valley, and then up and over a loose, rocky, volcanic landscape. The magma is so close to the surface, that steam escapes from small holes in the earth. Along the hike, you’ll also get views of brightly colored sulfur lakes, an active volcanic crater, fertile valleys, and — of course — volcanic peaks like Ngauruhoe, which became the setting for Mount Doom.

There are a couple of standard hotels or inns nearby, as well as one or two luxury lodges in the larger area. The nearest major airport is Taupo, over an hour away. The easiest way to arrange a trip here is to ask a travel expert who can handle all the details.

As I said above, all of the Lord of the Rings trilogy was filmed in New Zealand. And since Wellington is Peter Jackson’s hometown, it holds the highest concentration of locations used in the films. The most accessible to downtown Wellington is Mount Victoria, a lovely nature park within Wellington’s central business district. Mount Victoria has a pathway up to the top where if you pay close attention, you’ll notice a forested section used as Hobbiton Woods, where Frodo and friends hid under gigantic roots from the fearsome Nazgûl.

Wellington is also home to the Weta Workshop, a special effects studio where many of the creatures from the films were made. They offer great interactive tours that both educate and entertain. You can learn about how special effects are made, see and feel some of the props, and be inspired. The Weta Workshop is just outside Wellington in the suburbs, so stay downtown and arrange a half-day visit for a tour.

Queenstown: Many film locations from The Lord of the Rings and The Hobbit

This adventurous, outdoorsy place on New Zealand’s South Island offers so much that the list of exciting activities seems never to end. Most folks know Queenstown as being the adventure capital of New Zealand, home of the bungee jump, jumping-off point for Milford Sound and the Milford Track, and home to some of the most stunning Alpine scenery in the world.

In keeping with the vibe here, there are several different offerings for wilderness day trips that visit film sites from  The Lord of the Rings, The Hobbit, and Amazon The Rings of Power. That’s right, you can experience Queenstown’s famous valleys, rivers, and soaring mountains as well as get your film fix.

We have two favorite film site tours here. One is on horseback, the other by 4WD vehicle. On horseback, you can visit the Dart River Valley and Paradise, which became the backdrops for Ents and Isengard (specifically, Wizard’s Vale and the Misty Mountains). Note that this area was also used in other films like Chronicles of Narnia, X-Men: Wolverine, and more.

If riding a horse for a couple of hours isn’t your style, then consider doing a guided 4WD trip. By 4WD, you can go in a small group on an off-road adventure fording rivers and scaling mountains. Head to the hinterlands outside Queenstown for a visit to the film sites for Misty Mountains, the refugees of Rohan, Minas Tirith, Battle of the Wargs, Pillars of the Kings (Argonath), Ford of Bruinen, Gladden Fields, Isengard, Ithilien Camp (Oliphant’s scene), Lothlorien Forest, Battle of Amon Hen/Seat of Seeing, and more.

For any of the film touring options around Queenstown, remember that the sets are no longer on the land. You’ll simply be seeing the scenery that was used as the backdrop in the films. It’s still worth it though because you can kill two birds with one stone — see the film sites and the landscapes that make New Zealand famous! Naturally, the sites picked for the films were carefully selected to be the most beautiful in the country. So you won’t go wrong, spending a day to “geek out” on film and adventure.

Stay anywhere in and around Queenstown to enjoy these tours. They last anywhere from a couple of hours to a full day.

Fiordland National Park: The Trifecta of Trilogies on the South Island

The Rings of Power, The Hobbit, and The Lord of the Rings Trilogies used the majestic Fiordland National Park for awe-inspiring scenic shots. Experience enormous fiords and spectacular waterfalls with a helicopter flight or day or overnight boat cruise. The grasslands of Te Anau Downs provided the backdrop for chase scenes, while Mararoa Saddle doubled as the wildlands which Thorin leads the dwarves through.

How to get around New Zealand to see the film sites from The Lord of the Rings, The Hobbit, and The Rings of Power:

While there are day tours from many of these locations the best way to move between locations is to Self Drive in New Zealand. Our New Zealand Travel Experts can design you a self-drive itinerary that adds in any or all of the above locations plus so much more that is on offer in New Zealand i.e a round of golf, visiting New Zealand Wineries, or Hiking and Tramping in New Zealand.

Ever since the release of The Lord of the Rings, New Zealand has become more and more popular as a travel destination to see the real Middle Earth. Contact us, your travel specialists for New Zealand, to get started planning your adventure today!